We have many food traditions in our house, but the one that reigns supreme is my Nona’s fuasa recipe.  My nona, Madeline Zanocco (the woman in the photograph on the left), emigrated to the United States from Vicenza, Italy.  She had five children, the forth of which was my grandfather.  My grandpa, Angelo Zanocco, decided to take on the role of rebel child in the family because he was only one of Madeline’s five children to marry a non-Italian.  This is why I always chuckle when I think about the fact that it was my German grandmother, Adeline (in the photograph below), who taught me to bake her fuasa recipe, and thus carry on the family tradition of making Italian Easter Bread every spring 🙂

I have been making (and eating) fuasa on Easter Sunday from as far back as I can remember.  The sweet crunchy goodness of the bread is synonymous in my mind with the holiday celebration.  Now that both Nona and my grandmother Addie have both passed on, I have made a point of continuing with the fuasa tradition each Easter.  I have made fuasa with my girls from the first year of their lives (My oldest can be seen in the picture below from 2007, making fuasa for the first time when she was only six months old.), because I find so much value in passing on our family food culture to the next generation.

And when I say I will make fuasa each year without fail, I always think of the year when I decided to triple the fuasa recipe (that means I was making 15 loaves of bread), and my oven broke.  I frantically called around to our friends in the area, but all were already away for the holiday weekend.  So, I packed up by 15 loaves of dough, my hubby, and my 18 month old and drove to Illinois State University where my sister was attending college.  From there I went to her friend’s apartment to bake.  Yes, I was baking 15 loaves of bread, with a toddler, in a college kid’s apartment…while he was having a party!  I’m not sure I was their favorite person that night 🙂  But the fuasa got done none the less.

It has been so fun to see the girls take on more of an active role in the baking of the fuasa each year.  It is truly my hope that they continue this tradition and pass it on to their little ones some day.

Beat the egg whites.  Baste the top of each loaf with egg whites, then sprinkle with sugar.  Bake each loaf for 20 minutes at 350 degrees and 15 minutes at 250 degrees.  Enjoy! 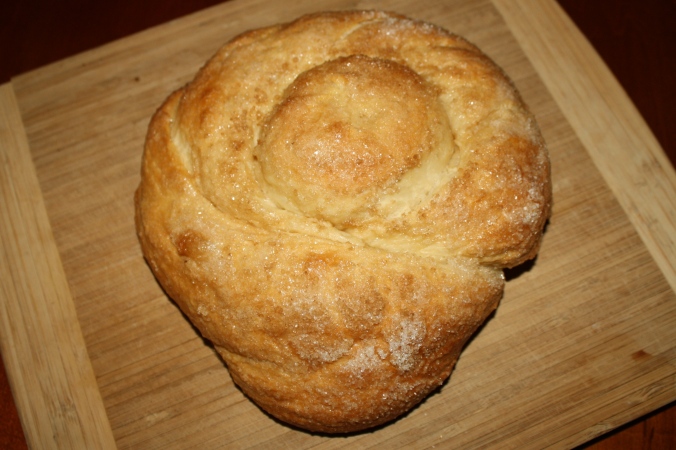 I wish each of you a very blessed Easter weekend!

This site uses Akismet to reduce spam. Learn how your comment data is processed.

Sign up to receive weekly emails from 815Yoga, featuring my biz partners and me. The best part? You will receive a FREE Nervous System Reset Guide just for signing up!