From the time I was young, my mom always encouraged me to be my own person.  Not to be afraid of what others thought of me, but to instead dare to be the person I believed I was meant to be.  As I mentioned in this recent post, over the last several years I lost a bit of this independent spirit.  More often than not, I began to do what I thought was acceptable by the majority, rather than doing what my gut was telling me.

Recently, while attending a presentation by Joel Salatin, he said, “If everyone else is doing it, I would tell you to do the exact opposite.”  These words stirred something deep within me.  Am I doing what I truly believe is best, or am I just moving with the current and doing what everyone else is doing?  I began to feel this pull deep within me to not fear being different, but to instead embrace those “differences” and run with them.

Homeschooling is something I have had on my heart and mind since my eldest daughter began kindergarten.  I never actually considered it a real option because it existed so far outside the realm of my daily life.  The people by whom I surrounded myself would never consider homeschooling, and being a teacher by trade, I faced a great deal of skepticism and resistance any time I brought up the topic with other educators.

But I believe God places people and circumstances before us which can aide us in the making of very tough decisions.  I believe He is the one that gives us that feeling deep in our gut, telling us what is best.  It is just up to us whether or not we want to pay attention to Him.  I believe He placed me in my teaching role at Cathedral of St. Peter School the past year and a half to build my confidence in two subjects I often feared.  I believe He surrounded me with other educators who were open to non-traditional means of education if it best meets the needs of the child.  And I believe He gave me two girls, who like me when I was young, appear eager to try something different and new.  And with all of this in my back pocket, I decided to follow that feeling deep down inside of me, and embark upon the road less traveled by, and homeschool my girls this fall.

Now I don’t want to pretend that this decision was met with rosy eagerness by all, because that would be a very false statement.  However, throughout this summer I have been working to find fabulous homeschooling resources and create a space that fosters a positive experience for my girls.  And it is in the creation of this space that I feel confident to move forward in this new endeavor. 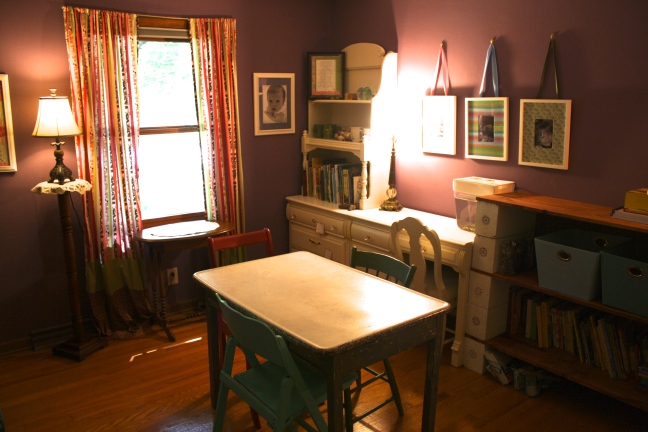 8 thoughts on “This Space”

This site uses Akismet to reduce spam. Learn how your comment data is processed.

All content is copyright 2012-2021.  Please do not use any text or photographs without written consent. Thank you!